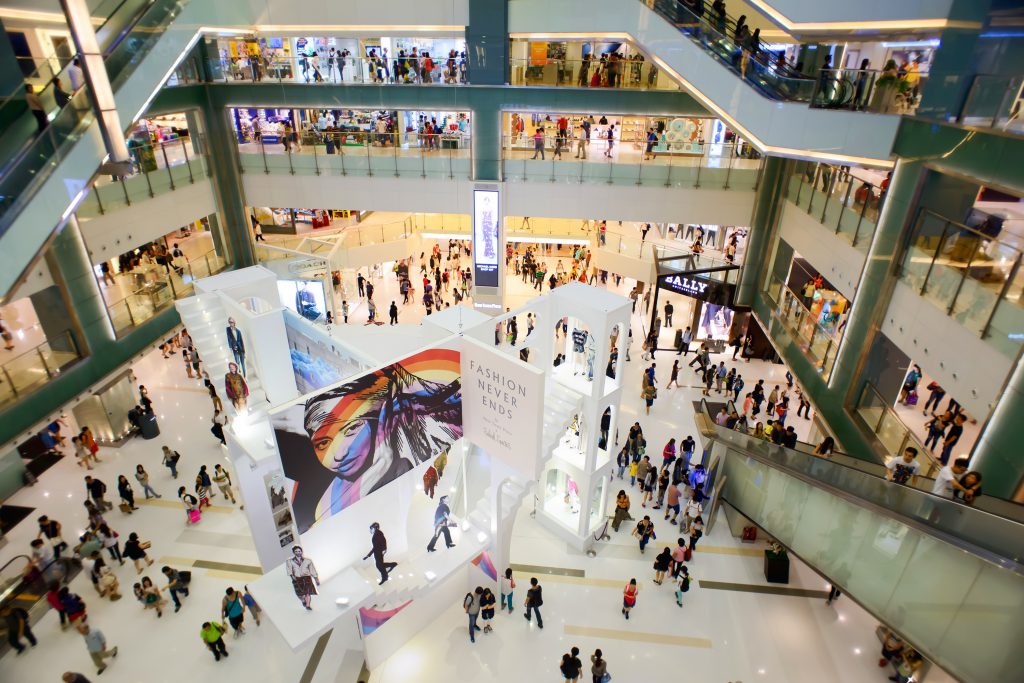 You can find a shopping mall practically everywhere you turn in Hong Kong.

These range from smaller plazas with shops that focus on a single product type (computers, audio-video equipment and fashion) to comprehensive mega malls that offer a wide range of shops that cater to every taste and budget. In the larger malls, you’ll find international brand goods from every corner of the world.

Expect to see festive decorations adorning the outside and inside of most major malls at Christmas and Lunar New Year. Most of these larger malls have hourly as well as monthly parking. Sometimes – and especially during public holidays — there are special parking discounts for shoppers who make purchases over a certain amount.

Compared to American malls, Hong Kong malls are a full-service affair. Many offer complimentary services like baby stroller, wheelchair and umbrella lending; some even offer free candies and balloons to children. Large malls like Pacific Place and Harbour City have their own apps which you can download to access special offers and events and navigate from shop to shop. Here is a list of the city’s larger malls: 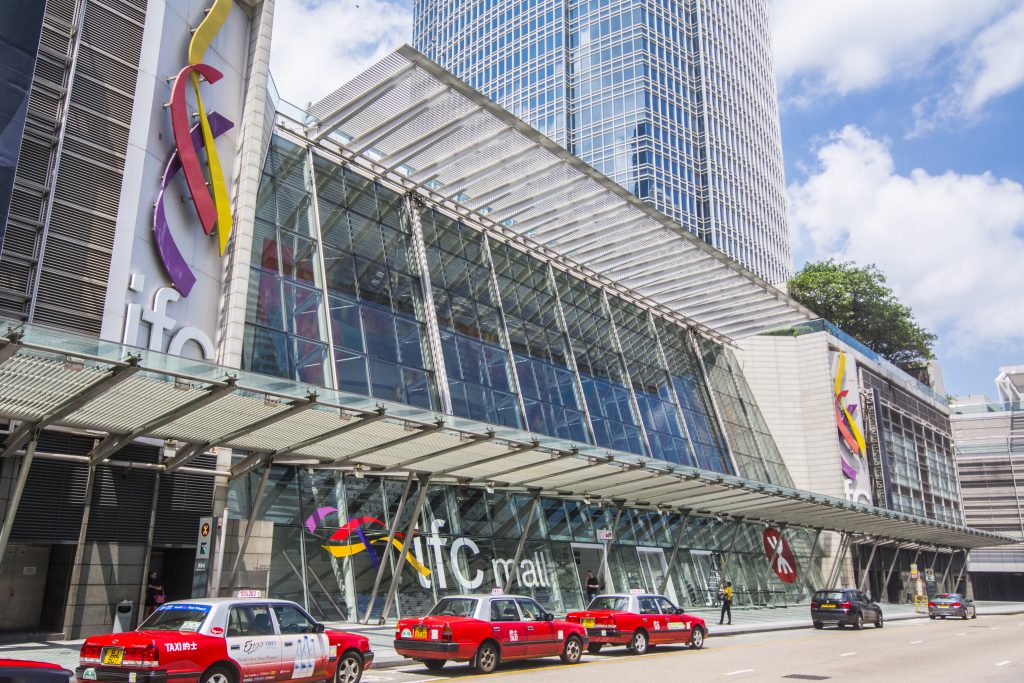 International Finance Centre (IFC)
The skyscrapers of IFC One & Two in the heart of Central are home to many international financial institutions. The towering, 88-story IFC Two is Hong Kong Island’s pre-eminent landmark and an enduring symbol of the region’s robust financial vigor. Both IFC One & Two are part of a mega complex that includes office towers; a three-level shopping mall with more than 200 high-end shops and restaurants, a five-screen cinema and a supermarket; an enormous rooftop garden; the Four Seasons Hotel & Four Seasons Place serviced apartments; and Hong Kong MTR Station, which services the Airport Express MTR line. Hong Kong’s flagship Apple Store also resides here, its three stories encased by floor-to-ceiling glass windows that overlook the harbor.

The Landmark
The Landmark — comprising four interconnected buildings, Landmark Atrium, Landmark Alexandra, Landmark Chater and Landmark Prince’s — is the largest shopping mall in Hong Kong’s Central District and arguably also the most luxurious. The buildings are connected by above-ground, air-conditioned, indoor walkways that may seem confusing at first, but which most expats quickly learn to navigate.

While Landmark Atrium, Landmark Alexandra and Landmark Chater are all somewhat similar in their lineup of luxury clothing and jewelry stores from international brands, Landmark Prince’s has more everyday items including household goods, a supermarket, a photo shop, a bookstore, and several children’s and baby goods shops.

When shoppers have had enough of designer brands, they can sit down to eat at one of the Landmark’s exclusive dining establishments, including three-Michelin-starred L’Atelier de Joel Robuchon and 8½ Otto e Mezzo Bombana. The Landmark is also home to two five-star hotels, Mandarin Oriental and The Landmark Mandarin Oriental.

The soaring Landmark Atrium is quite well known for its elaborate mechanized displays every holiday season, with different fanciful themes each year like circus animals, bears and monsters. 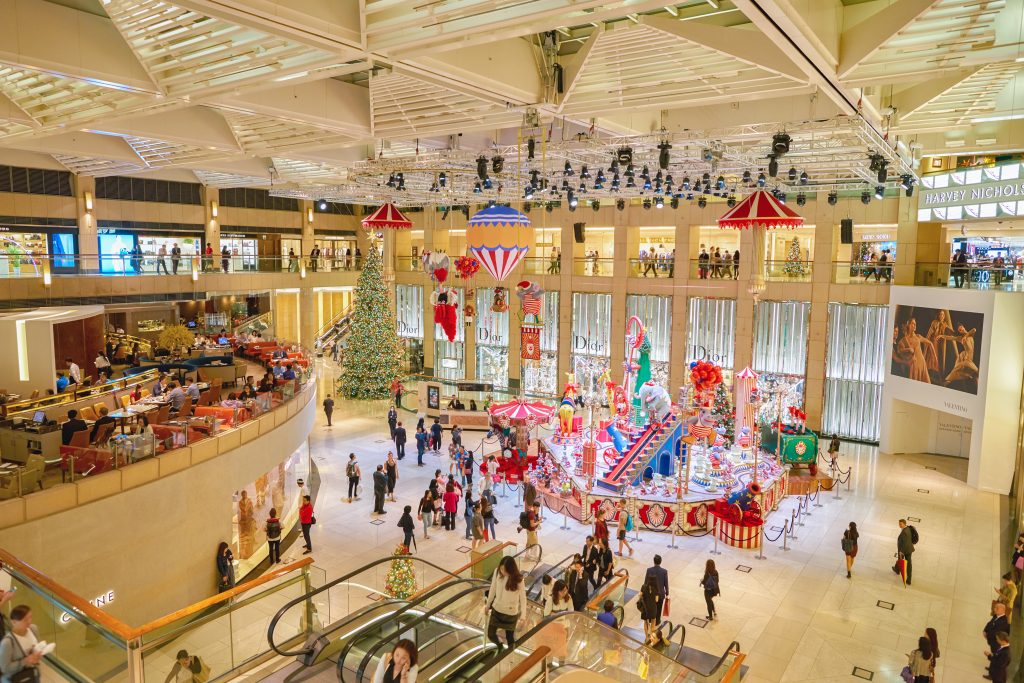 Pacific Place
Pacific Place is conveniently located in Admiralty, in between several five-star hotels, Grade-A office buildings, and the urban oasis of Hong Kong Park. The mall, colloquially referred to as “PP,” houses stores selling high-end products and services — from designer fashion outlets to gourmet restaurants. It is also home to one of Hong Kong’s most comfortable cineplexes, one of only two Hong Kong branches of luxury British department store Harvey Nichols, and a very spacious and popular supermarket, Great Food Hall.

Pacific Place is famous for their holiday wonderland display. Tickets for photos with their red-cheeked, white-bearded Santa are a hot item in November and December, selling out fast online every year.

Hysan Place
Conveniently linked to the Causeway Bay MTR Station, Hysan Place is one of the area’s trendiest hangout spots. It has over 120 international branded shops on 17 floors of retail space and its selection of casual and fine dining restaurants offering a variety of cuisines is one of the mall’s biggest draws. It and the Leighton Center shopping mall are part of the larger Lee Gardens development that dominates Causeway Bay retail. Eslite, a popular bookstore chain from Taiwan, opened its first retail shop in the mall selling a large bilingual collection of books and decent selection of international magazines. 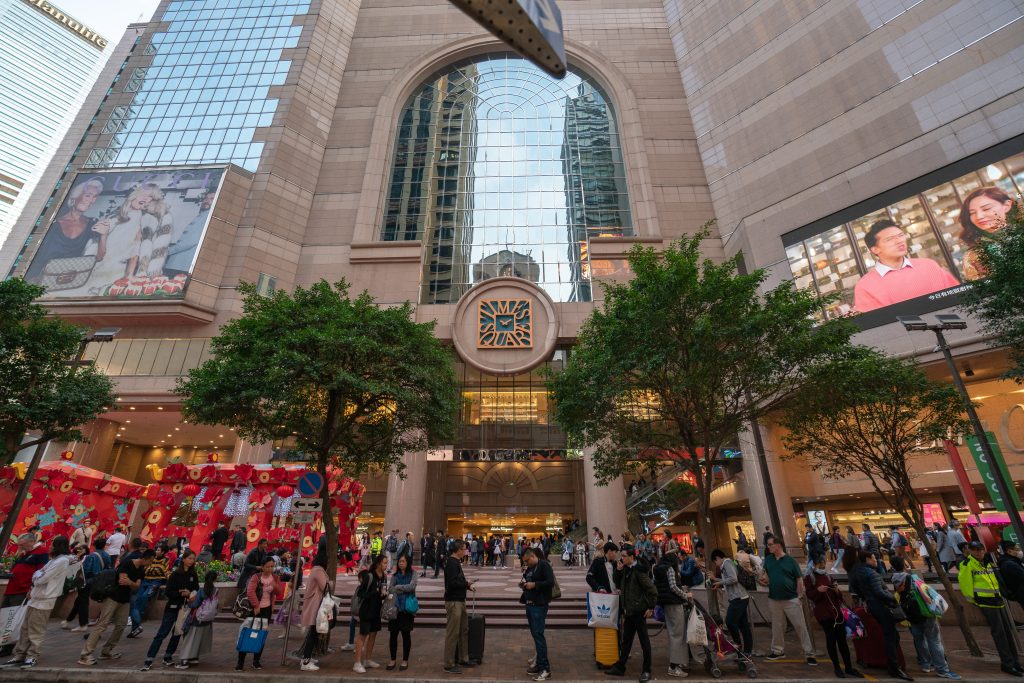 Times Square
Times Square in Causeway Bay is one of Hong Kong’s busiest shopping malls. It has 12 floors of shops, cinemas and restaurants both inside and nearby, anchored by high-end department store Lane Crawford, which offers designer labels, branded cosmetics and home decor, and a City’super grocery store in the basement.

Throughout the year, Times Square is home to large and colorful themed displays designed by local and international artists, providing endless photo opportunities for locals and tourists alike. The displays and the giant clock are also well-known meeting places.

Cityplaza
Cityplaza, located in eastern Hong Kong Island in the Taikoo Shing residential district, has 170 shops, numerous restaurants, a five-star cineplex and a full-facility ice rink. The mall is conveniently accessible by MTR, bus and tram, and opens from 7am to midnight. As many Japanese expats live in the neighborhood, Japanese chains Apita and Muji both have locations in Cityplaza. Japanophiles will also want to seek out the Aeon department store and supermarket in the nearby Kornhill area.

Harbour City
Spread across two million square feet of prime real estate, Harbour City is Hong Kong’s largest and most diverse shopping mall. Conveniently situated near the iconic Star Ferry Pier and overlooking the picturesque Victoria Harbour, the mall is equally a shopping destination and tourist attraction in its own right. Made up of five sections (including a major cruise terminal), and offering eight categories of retail outlets, there is literally something for everyone under its expansive roof.

iSQUARE
Located in the heart of Tsim Sha Tsui at the busy intersection of Nathan and Peking roads, iSQUARE is a futuristic shopping and entertainment complex linked to the Tsim Sha Tsui MTR station. In addition to 31 floors of shopping, dining and entertainment outlets, iSQUARE is home to five grand cineplexes, including the largest IMAX Digital Theatre in Hong Kong.

K11 Art Mall
Located in Tsim Sha Tsui East, K11 Art Mall opened in 2009 as a high-concept hybrid of art and commerce. With exhibition windows displaying over two million dollars’ worth of art, and built using various elements of green design and technology, shopping in K11 is an experience unlike any other in Hong Kong. The mall also hosts a variety of workshops on subjects from photography to soapmaking to pottery. 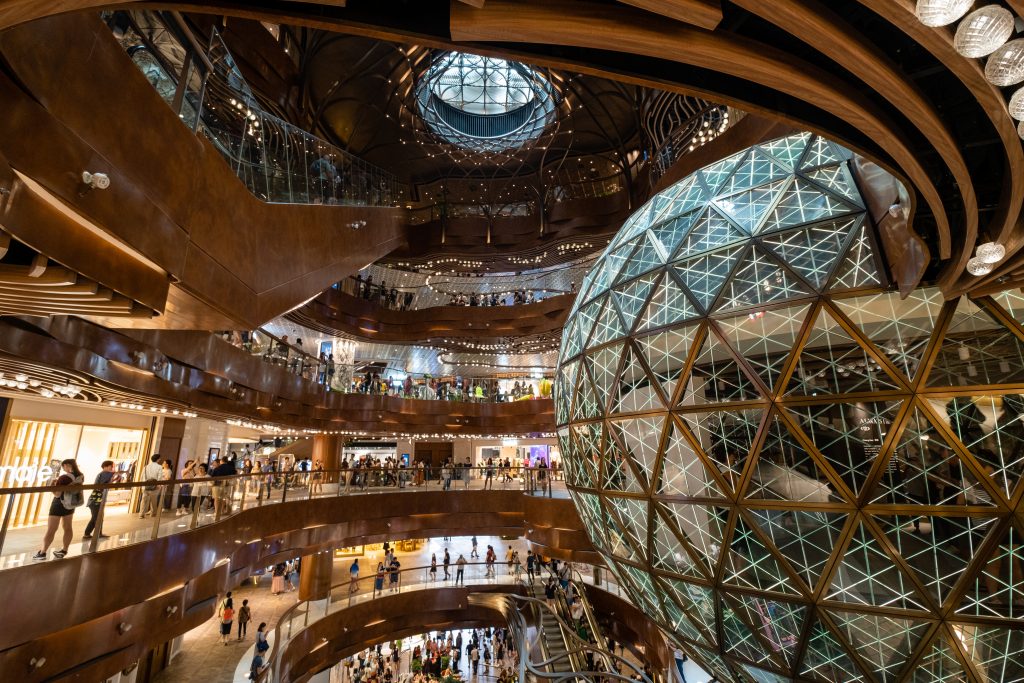 Mira Mall
With 500,000 square feet of shopping space this mall is a must for those doing the so-called Golden Mile walk up Nathan Road. Complete with shopping, dining, grade-A office space and a five-star hotel, the Mira Mall combines business and pleasure under one roof.

The One
Hong Kong’s tallest retail complex, The One, houses an eclectic mix of local and regional brands and boutiques. Its sheer height and prime location at 100 Nathan Road have blessed it with sweeping, unobstructed views of Victoria Harbour. Book an alfresco table at one of its fine dining establishments such as Wooloomooloo Prime or Harlan’s for unparalleled views of the city. ELEMENTS
Named after the five Chinese elements of wood, water, fire, earth and metal, ELEMENTS is a deluxe, high-end shopping mall located right above the Kowloon MTR station and Airport Express Check-in. It is also connected to several luxury apartment buildings and Hong Kong’s tallest building, the International Commerce Center (ICC). Special features include an indoor ice rink and a pleasant rooftop terrace with a large children’s playground. Shoppers can enjoy refreshments at one of the many indoor restaurants or at Civic Square, the mall’s vibrant alfresco dining area.

APM
Popular with a younger, trendier crowd, APM in Kwun Tong is a shopping mall with a unique selling point: its late opening hours. As suggested by its name (a mashup of AM and PM), not one of its 170 retail outlets closes earlier than midnight, and many of its dining and entertainment outlets stay open till 2am and beyond. Here you will find a mix of high-street brands and local boutiques, along with a cinema and plenty of affordable eateries.

MegaBox
MegaBox, located in Kowloon Bay, is a 1.1-million-square-foot shopping and entertainment complex. Boasting Hong Kong’s largest home furnishing store (IKEA), an interactive children’s entertainment area, an IMAX theater and the city’s first Olympic-sized ice rink, MegaBox has something for all ages. A shuttle bus runs to and from the Kowloon Bay MTR station, although you may have to queue at peak hours. There is parking available, but this too can get very busy, especially on weekends. 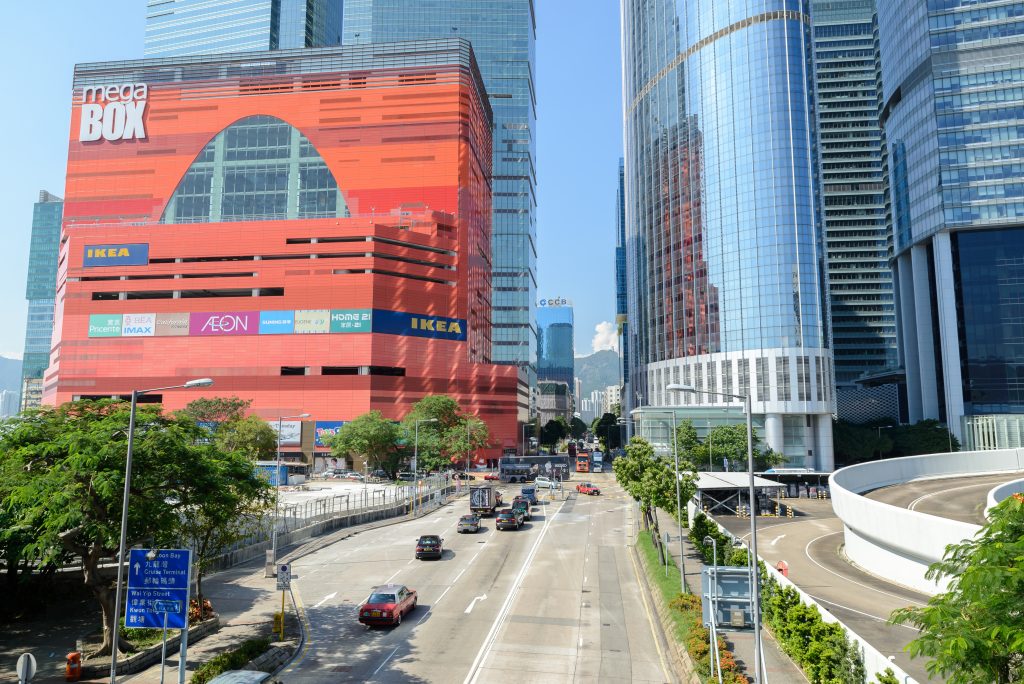 Langham Place
The Langham Place Shopping Mall is a trendy 15-story landmark in the densely-packed heart of Mong Kok. Comprising an area of 600,000 square feet, the mall is home to a plethora of trendy retail outlets, popular food and beverage outlets and a cinema, all with exceptionally long opening hours and direct access to the area’s one and only five-star hotel.

Festival Walk
Festival Walk, located in Kowloon Tong, was the biggest shopping mall in Hong Kong when it first opened in 1998. Housing over 200 retail shops and restaurants, a multi-screen cinema, and one of the city’s largest ice rinks, Festival Walk is also conveniently linked to the Kowloon Tong MTR station.

Other malls in Kowloon include: 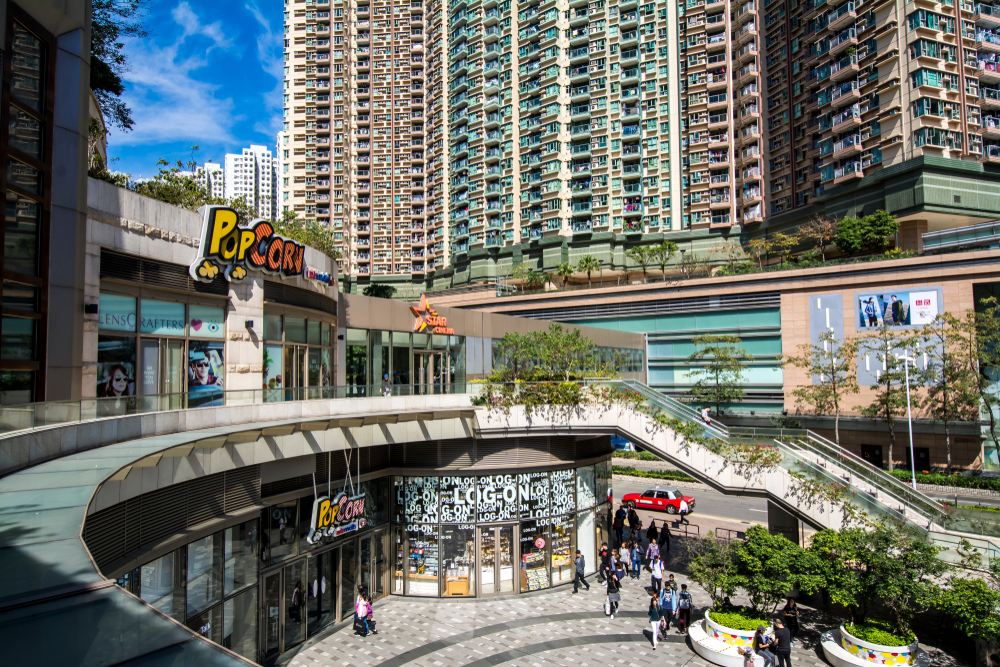 New Town Plaza
Located at Sha Tin MTR station, New Town Plaza is a huge shopping mall that attracts large numbers of mainland Chinese tourists going to and from Shenzhen, who are frequently spotted toting large suitcases from store to store. The 2-million-square-foot mall houses all the well-known fashion chains, as well as some lesser-known brands. Children will be entertained at Asia’s first Snoopy’s World, a small, free theme park based on Charles Schulz’s beloved characters.

PopCorn
Located right on top of the Tseung Kwan O MTR station, PopCorn is a smaller mall that attracts Tseung Kwan O residents and generally a younger crowd. It is home to 150 affordable shopping and dining outlets as well as a cinema.