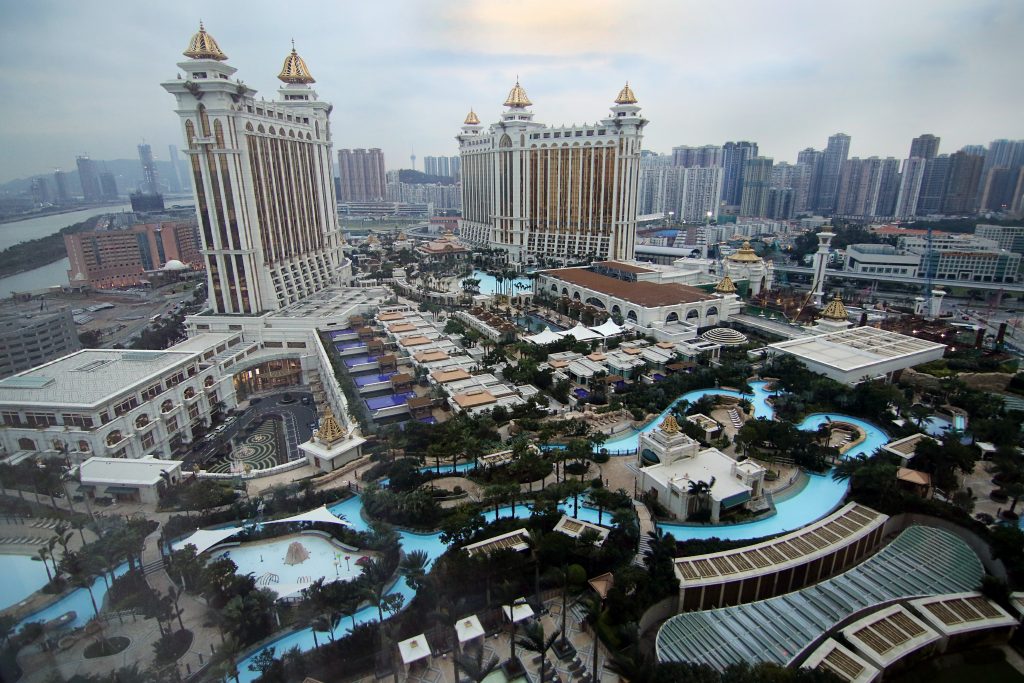 Where to Stay and Play

Macao’s themed destination hotels are tourist attractions in themselves.

Encompassing luxury accommodation and leisure facilities, casinos, dining, shopping and entertainment venues, these huge, integrated resorts provide everything you could ever need during your stay in Macao.

Here are some of the largest:

City of Dreams Macau
In the heart of Cotai, the City of Dreams resort offers four top-class hotels inside its perimeter — Nüwa (currently under renovation), Grand Hyatt, The Countdown, and the sparkling, Zaha Hadid-designed Morpheus, which opened in 2018.

The City of Dreams is also home to the internationally acclaimed production “House of Dancing Water” and one of Macao’s largest and most prestigious nightclubs, Club Cubic.

Grand Lisboa
The architecturally striking Grand Lisboa is a hotel and casino in downtown Macao. Standing at 258 meters, it is the tallest building in the city and a distinguishing feature of its skyline. Three of its restaurants have one or more Michelin stars. The older Hotel Lisboa next door was for years the most glamorous destination in Macao — having taken pride of place in the city since 1970. 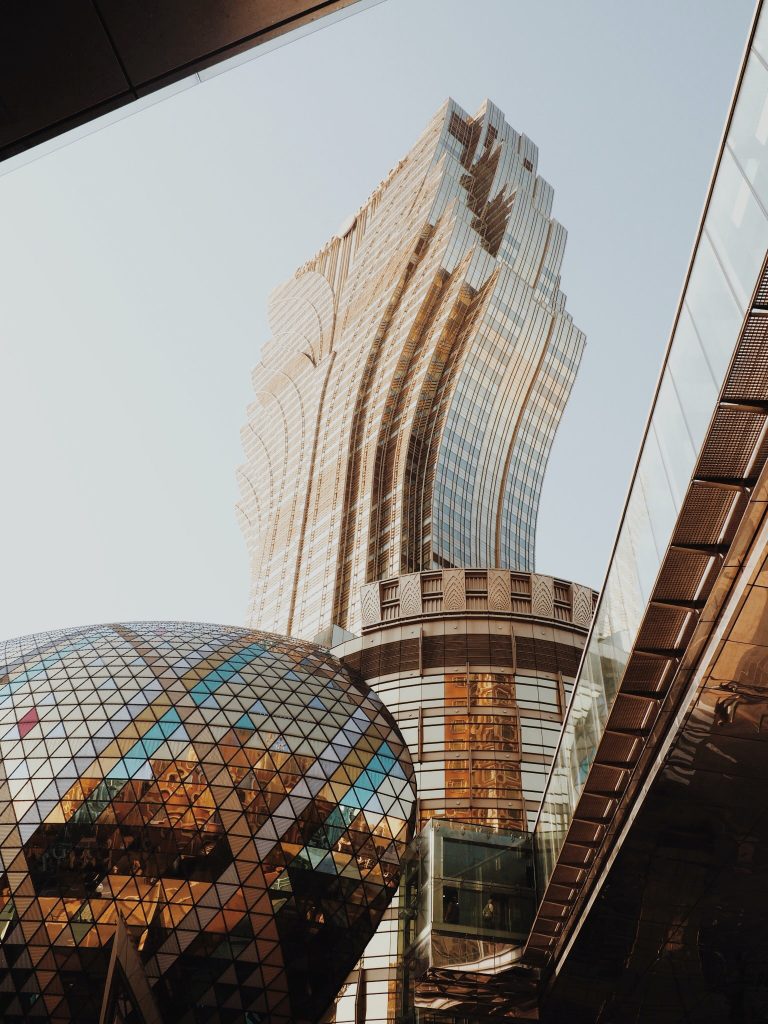 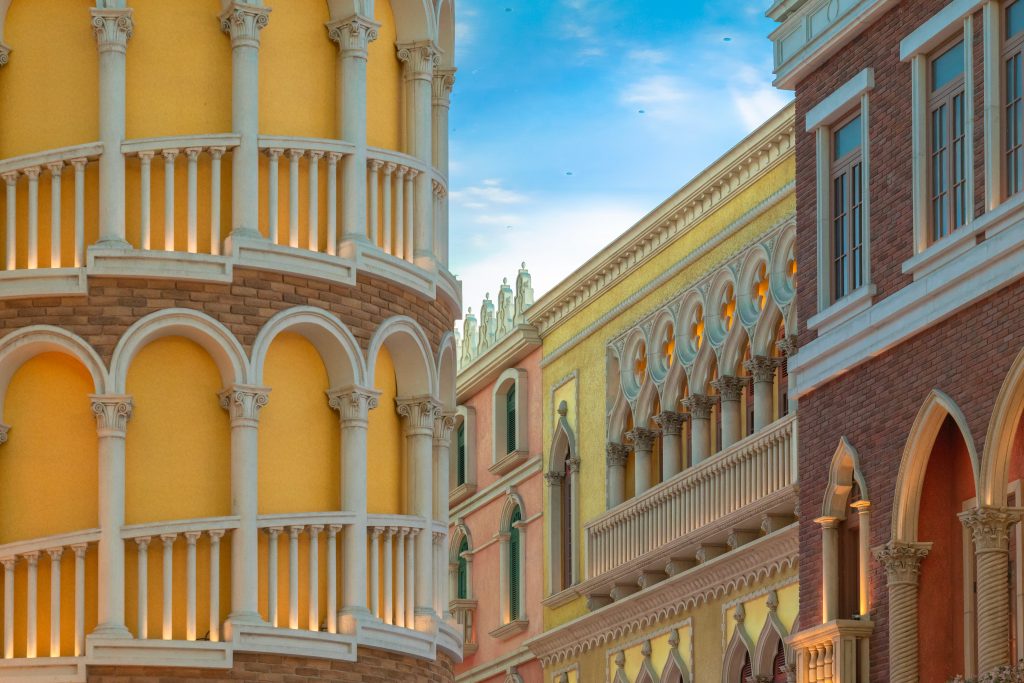 Sands Resorts Macao
Encompassing seven luxury hotels, more than 850 shopping outlets and 150 restaurants, and numerous meeting and entertainment venues, the Sands Resorts Macao is one of Asia’s leading resort destinations. Within this integrated development on the Cotai Strip you will also find the world’s largest casino inside the famous Venetian Macao hotel. Other world-renowned hotels include the St. Regis, Four Seasons, Sheraton, Conrad, The Parisian, and the very first Las Vegas-style hotel built in Macao — Sands Macao. Macao is full of moments and corners where you’ll think you’ve traveled in place and time to old-world Europe.

The city reflects a diversity of cultural influences, from its colonial architecture to its cuisine, and Macao has done a great job of preserving its Portuguese heritage for tourists.

Comprising more than 20 ancient monuments and structures, Macao’s historic district is like an open-air museum of beautifully preserved cultural relics and restored colonial buildings. Here are some of the most well-known:

Senado Square
At the very heart of Macao’s historic district is Senado Square. Framed by colorful colonial buildings, this picturesque piazza with its wave-patterned mosaic floor and iconic fountain has been Macao’s urban center for centuries. It continues to be a hub of business and tourist activity in the ex-Portuguese colony. The buildings surrounding the square — St. Dominic’s Church, Holy House of Mercy, Leal Senado Building and the Sam Kai Vui Kun Temple — are heritage sites themselves, protected by a law that prevents any alteration to their facades.

Today, only a dramatic stone facade and grand staircase remain of the historic structure. Incredibly, the façade’s original stone sculptures, carvings and balustrades were left intact, and it is one of the city’s most well-recognized landmarks. The Jesuit College next door, founded in 1594, was the first Western college in Asia where missionaries studied Chinese before serving at the Ming Court in Beijing as astronomers and mathematicians. 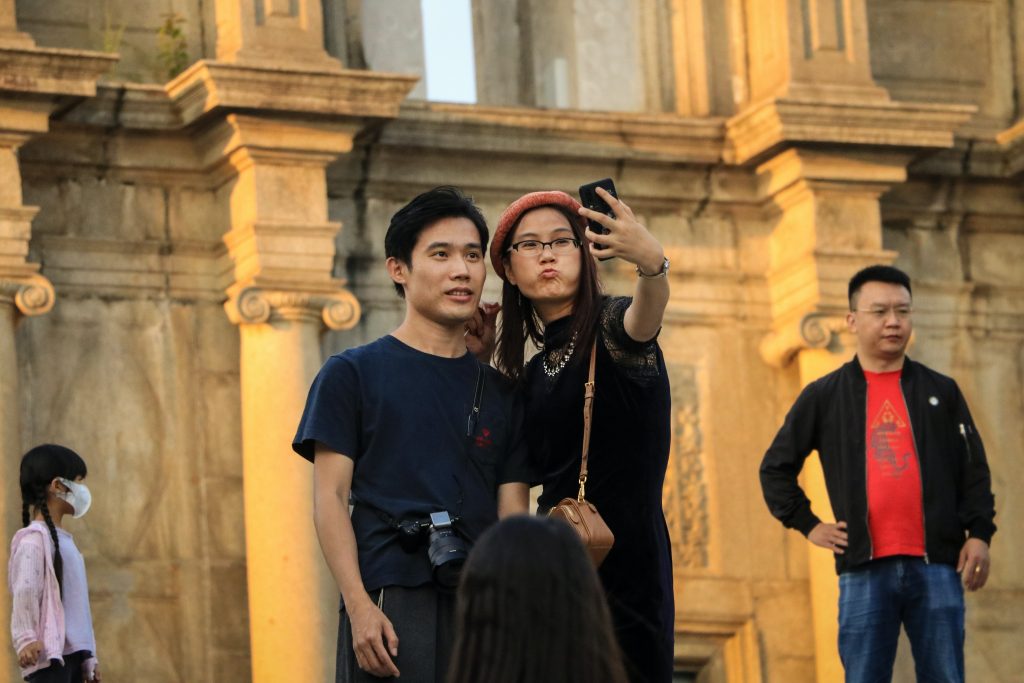 Museum of Sacred Art and Crypt
Built in the inner area of the ruins, just behind the iconic façade in the place where the church and Jesuit college once stood, the Museum of Sacred Art and Crypt showcases 16th- to 19th-century objects of great historical and artistic value. In the center of the crypt, on a granite stone, lie the remains of a tomb which might have belonged to the founder of St. Paul’s College, Father Alessandro Valignano.

Guia Fortress and Lighthouse
The 17th-century Guia Fortress comprises an old colonial military fortress and a chapel. The chapel, built in 1622, retains many of its original features and frescoes. The lighthouse, built in 1864, stands at 91.4 meters tall and operates a rotating light that is visible from 16 nautical miles away. It is still in use to this day. On the highest part of the Macao peninsula, the fort is an ideal observation point over the city on a clear day — although preservationists say that controversial construction projects nearby threaten the site’s visual integrity and sightlines. 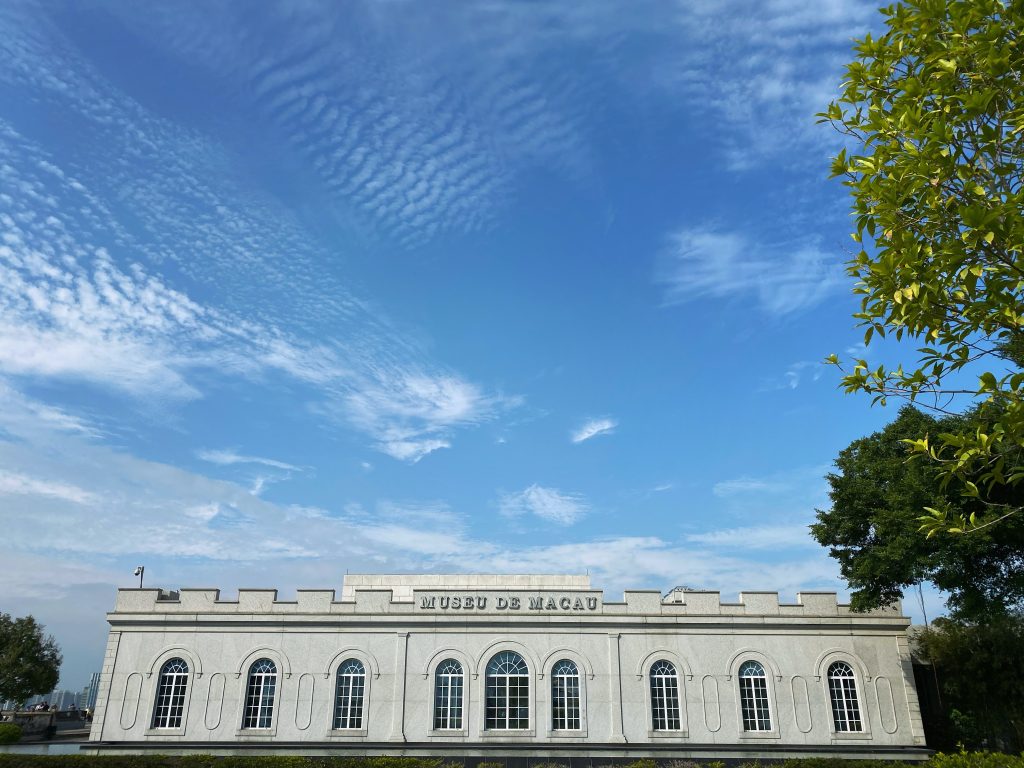 Fortaleza do Monte (Monte Fort) and Macau Museum
Built by the Jesuits at the beginning of the 17th century, the Monte Fort was designed to survive a two-year siege but its cannons were only fired twice in battle. After its time as a military base, it served as a weather station. Today, the fort is home to the Macau Museum, which showcases an official account of the city’s history and present development. The fort is also a popular place from which to view the sunset.

Museum of the Holy House of Mercy
Established in 1569, the Holy House of Mercy is the oldest social institution in Macao. To record and commemorate the many good works undertaken by the institution, the museum was inaugurated in December 2001. Oil paintings, ancient manuscripts, a bronze bell, ivory statues and religious artifacts are displayed along with Chinese, Japanese and European porcelain pieces, a testament not only to the history of the house but to Macao itself.

Saint Dominic’s Church and Treasure of Sacred Art Museum
Saint Dominic’s Church has an imposing façade of cream-colored stone with white stucco moldings and green-shuttered windows. At the end of the 16th century, the Portuguese Dominicans built the church, along with a convent (which no longer exists). Start in the church, then move upstairs to the bell tower, where the Treasure of Sacred Art Museum houses around 300 important religious artefacts from the 17th to 19th centuries.

St. Joseph’s Seminary and Church
Dating to 1758, the old seminary (together with St. Paul’s College) was the principal base for missionary work undertaken in China, Japan and elsewhere in the region. Inside St. Joseph’s church, in one of the lateral altars lies a fragment of bone said to be from the arm of St. Francis Xavier. This is one of Macao’s most precious religious relics, a revered item that formerly resided in the collection of the Church of Mater Dei (now the Ruins of St. Paul’s).

St. Joseph’s Church and the Ruins of St. Paul’s are the only examples of baroque architecture in China.

Macao’s historic heart holds many other famous squares and relics. For more information on Macao’s heritage attractions, including addresses and opening hours, please visit the official website of the Macao Tourism Office. 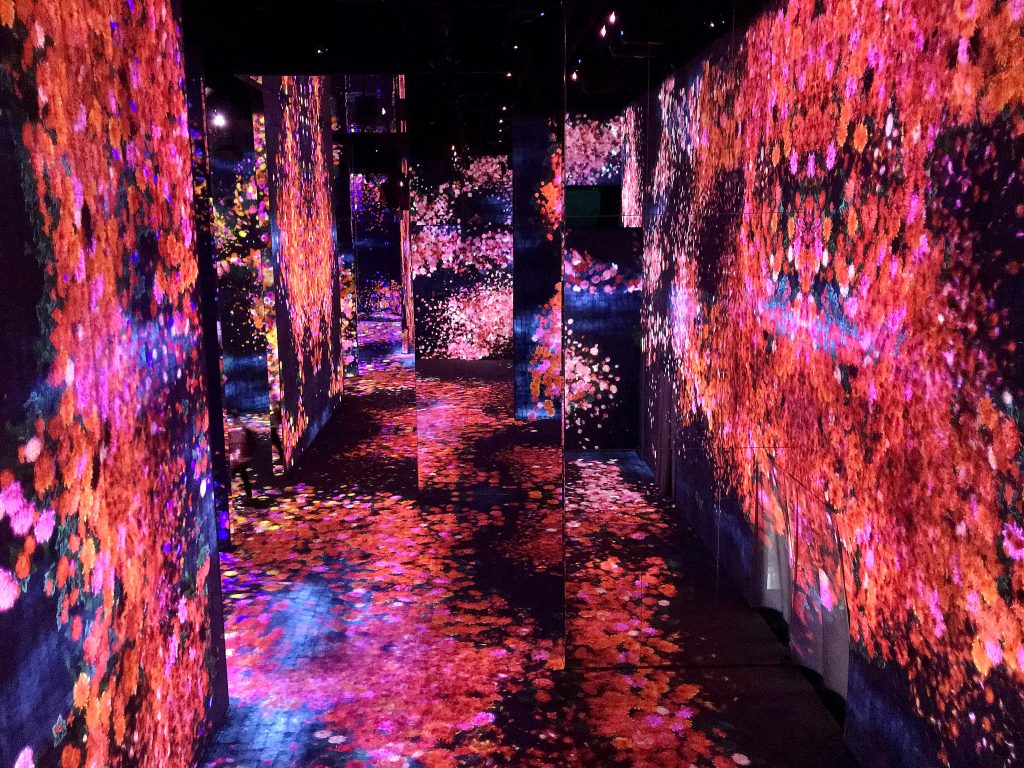 The two decades since Macao returned to Chinese sovereignty have seen galleries and art events sprout up all over Macao as the government encourages both the promotion of local artists and the staging of exhibitions. At the heart of it all is the Macao Museum of Art, opened in 1999 and featuring regular international shows. Heritage sites have also been called into use; most stunning of all is the Macao Contemporary Art Center – Navy Yard No. 1, a former navy yard that now houses regular contemporary art shows. Meanwhile, the first edition of Art Macao — featuring a series of international exhibitions, along with cultural events such as classical music concerts — was launched in 2019, running from June to October. Japanese art collective TeamLab also launched an immersive, Instagram-friendly digital art museum at the Venetian Macau in 2020.

An extensive list of Macao’s artistic hotspots can be found on the Cultural Affairs Bureau’s website under “Cultural Facilities.”

Macao Giant Panda Pavilion
Giant pandas Kai Kai and Xin Xin were gifts from the Chinese central government in commemoration of the 15th anniversary of Macao’s reunification with China. They’ve since been joined by twin offspring Jian Jian and Kang Kang, who were born in 2016. The pandas are at the Macao Giant Panda Pavilion in Seac Pai Van Park, Coloane, which provides viewing facilities as well as an information center. Tickets should be purchased in advance due to limited daily numbers.

Macau Tower
The 338-meter-high Macau Tower offers panoramic 360-degree views of Macao and the surrounding Pearl River Delta from its observation deck and revolving restaurant. Entrance to the tower is free. If you’re in the mood for a thrill, this is the place to be: international extreme sports operator AJ Hackett has a center here, offering visitors the chance to walk around the outside of the tower, climb to its highest point, or jump off it! 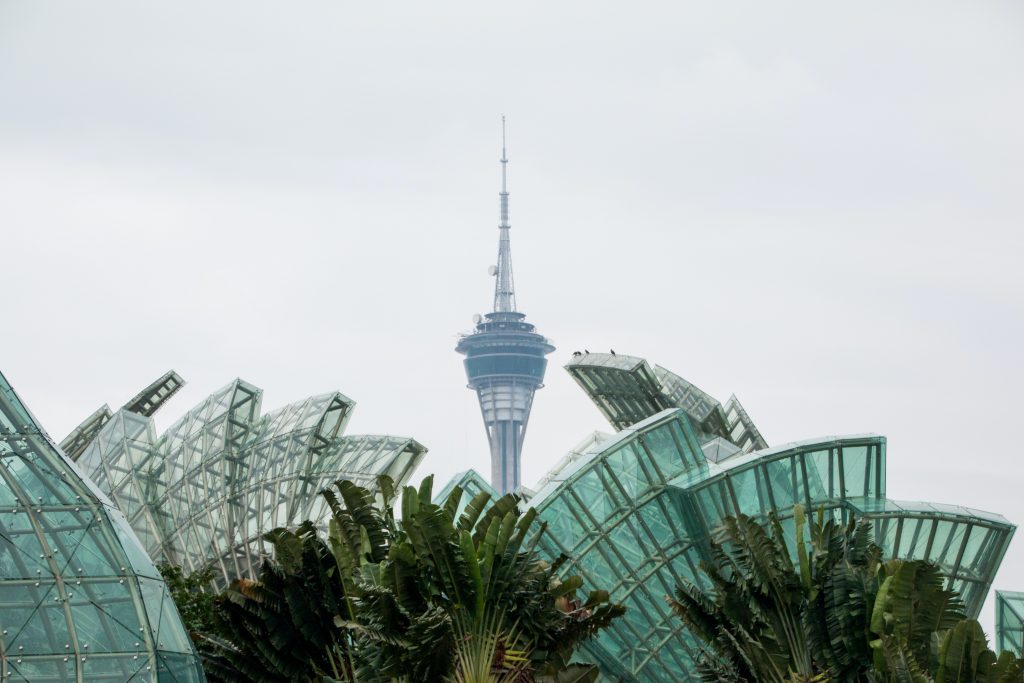 At 233 meters, the Macau Tower Bungy Jump holds the Guinness World Record for the highest commercial bungy jump from a building. 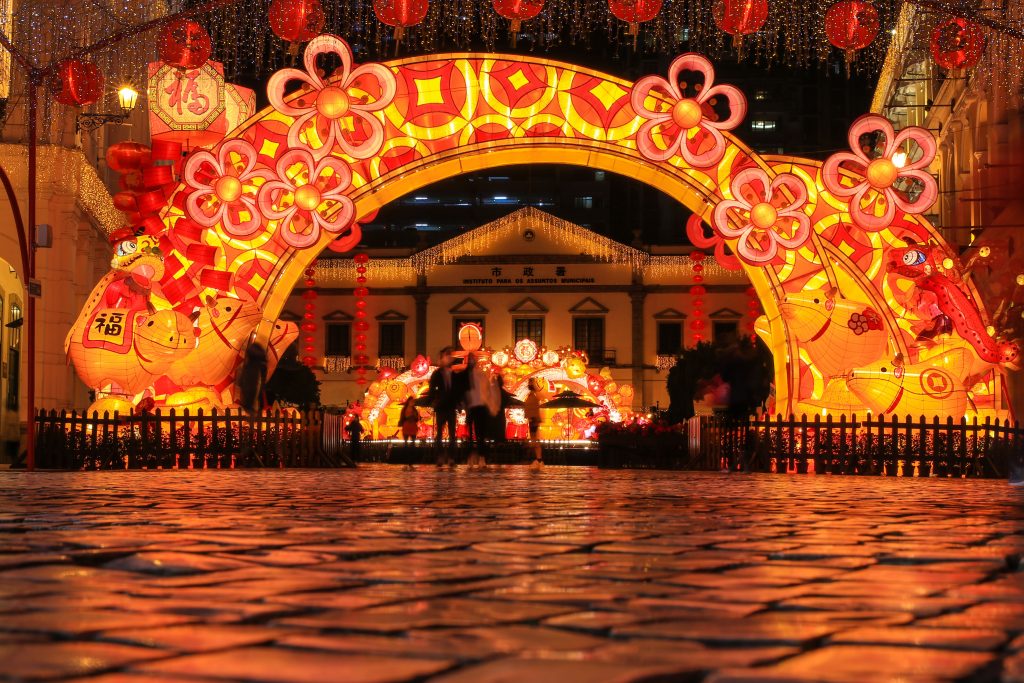 Macao plays host to a number of regional, national and international events and festivals each year. Here are some of the highlights.

Macao Arts Festival
Every spring, the Macao Arts Festival celebrates the world of art in all its forms. For an entire month, visitors and residents of Macao are treated to an array of artistic and sensory displays in different venues around the city. Some performances, presented by local and international artists, take place in UNESCO-listed World Heritage sites and buildings.

Macau Food Festival
A must-do for foodies, the Macau Food Festival brings out hundreds of local food merchants to feature their products and food offerings. Along with Macanese and Portuguese fare, the festival also features delicacies from Europe, mainland China and other parts of Asia. Located in the Sai Van Lake Square. 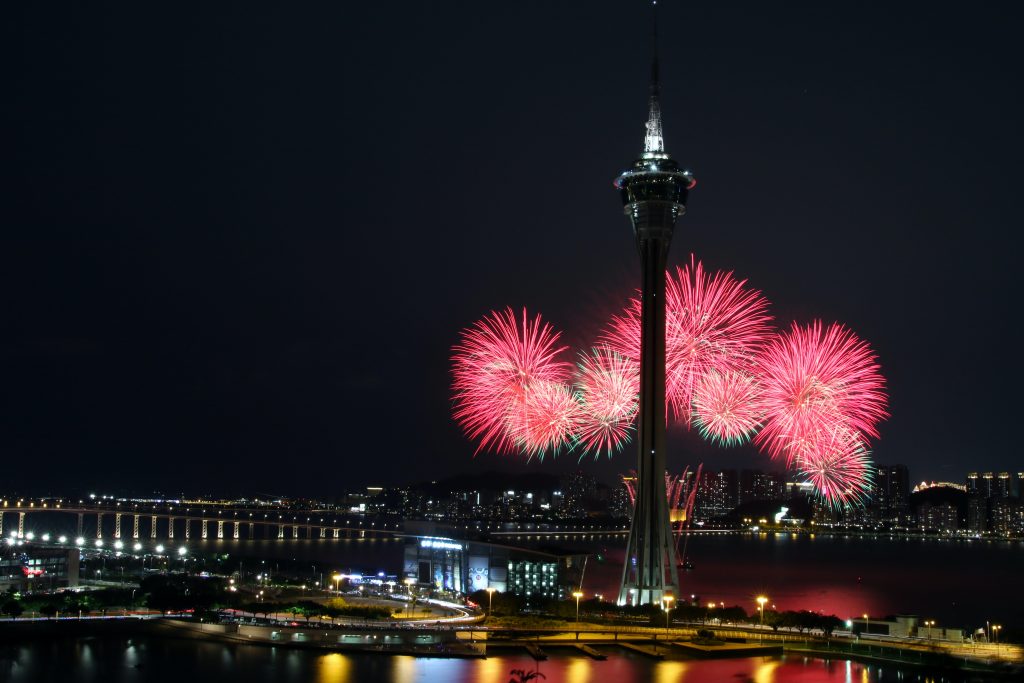 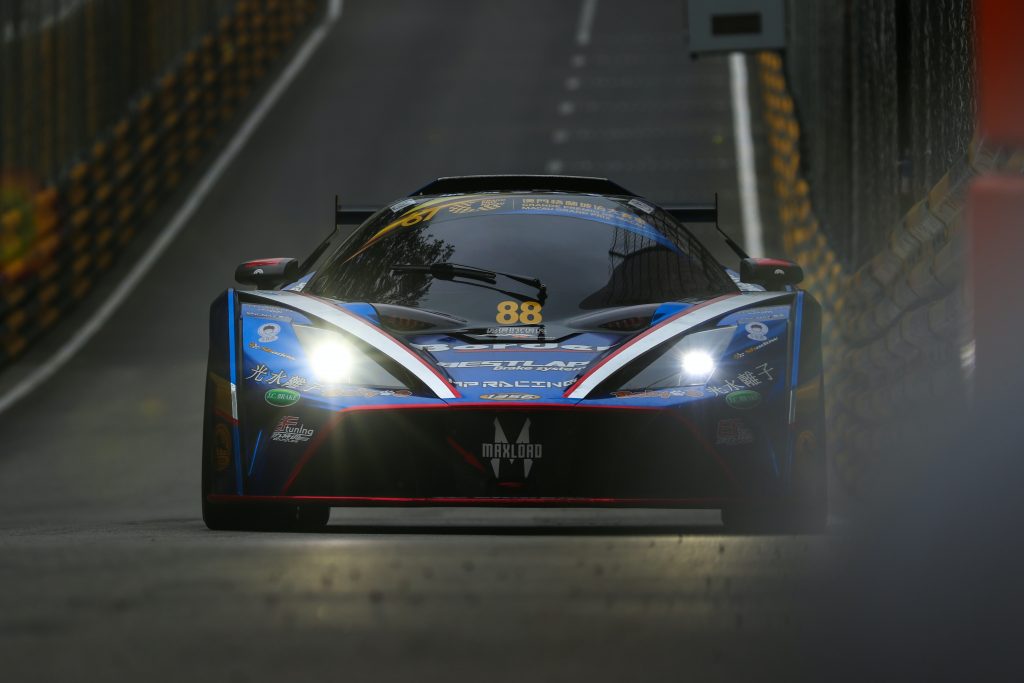 Given its small size, Macao is perhaps a surprising home to an array of annual sporting events, including the high-profile Macau Grand Prix, Macau (Golf) Open, FIVB Women’s Volleyball Nations League Macau, Macao International Dragon Boat Races and Macao International Marathon. Each year, the city attracts athletes from all over the world to participate in these globally broadcasted sporting events.

Macau Grand Prix
The annual Macao Grand Prix has become one of the city’s signature international events. The main race is the Formula Three championship and many of the drivers featured have gone on to enter Formula One racing — including future world champions Ayrton Senna and Michael Schumacher. Each November, the event attracts the best drivers and a field of super-fast cars and motorcycles to race the circuit, which traces the city’s main streets (a format similar to the famous Monaco Grand Prix).