About the GBA / Getting There / Getting Around / Entry Requirements 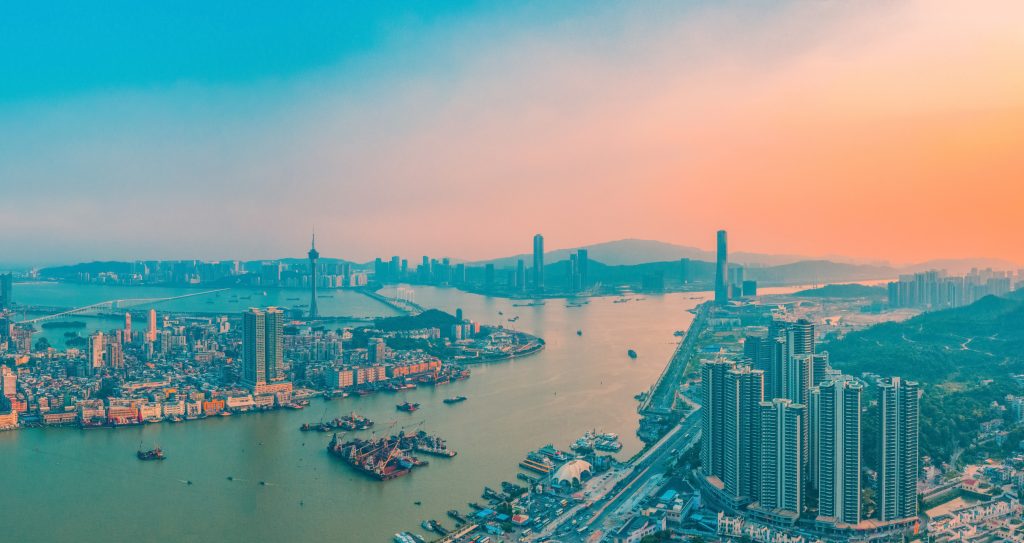 Hong Kong sits on the eastern lip of the Pearl River Delta, with Macao — like Hong Kong, a Special Administrative Regions of China — an hour’s ferry ride west on the other bank.

The GBA plan seeks to knit together nine major mainland cities with the two SARs into an integrated economic super-conurbation of more than 73 million people that will develop into a world leader in high-tech manufacturing, logistics and services. Whether China can pull off this vision remains to be seen, but the buzz is building, guaranteeing the region will remain a dynamic center for innovation and experimentation for the foreseeable future.

Part of the central government plan is also to push out polluting industries in favor of cleaner tech factories further up the value chain. The government sees this as a core part of a lifestyle equation that includes clean air, leisure facilities, good housing and schools and smart city development. A new San Francisco or Vancouver lifestyle bay in Southern China. 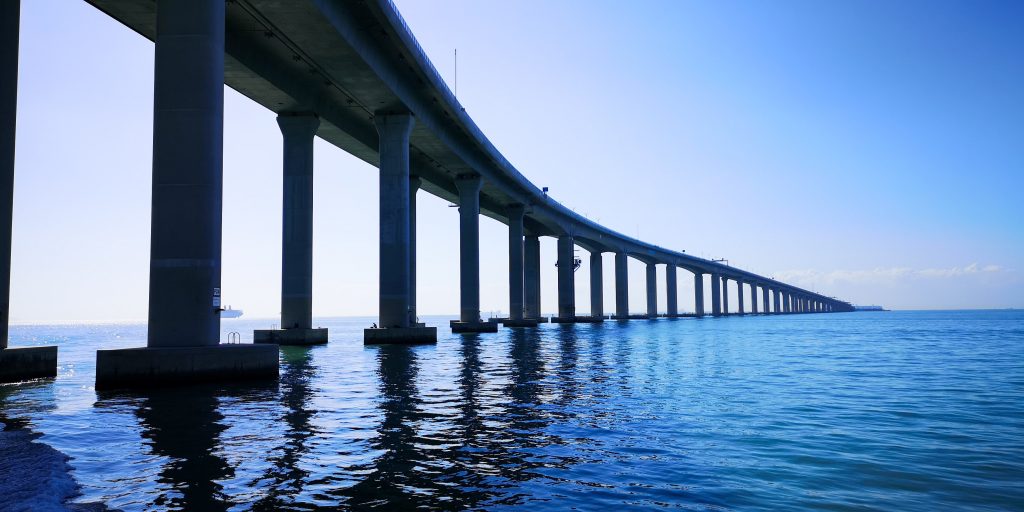 From the seas to the skies, and from humble coaches to high-speed trains, there are numerous ways to get from Hong Kong to the major cities of the Greater Bay Area.

Macao
The relatively small Macau International Airport services flights to and from cities in mainland China and other destinations in Asia.

Zhuhai
As the majority of travelers from Hong Kong to Zhuhai take the ferry, there aren’t any direct flights between Hong Kong International Airport and Zhuhai Jinwan Airport. Non-direct flights are offered by a handful of Chinese airlines, but this would take unnecessary time unless you plan to stopover in a different city en route.

Coach, limousine and high-speed ferry services to Macao and mainland China from Hong Kong International Airport are for transiting air passengers only. They are not available to passengers originating in Hong Kong.

To Macao and Zhuhai
Opened in 2018 and at 55 kilometers the world’s longest sea crossing, the Hong Kong–Zhuhai–Macao Bridge (HZMB) comes with 24-hour shuttle bus services that get you from Hong Kong to Macao in about 40 minutes. (Traveling to Zhuhai takes a further 5-10 minutes.) Shuttle buses leave as soon as they fill up, so there’s no need to worry about timetables — just rock up at the HZMB Hong Kong Port (near the airport) and hop on board. The shuttle bus costs up to HK$70 for a one-way ticket. 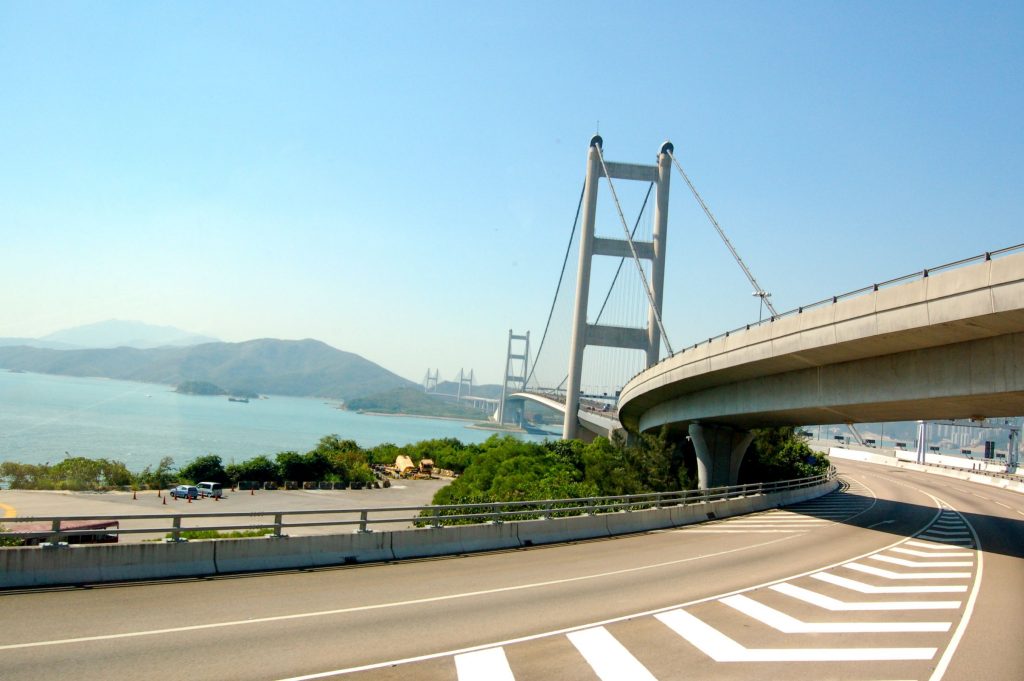 Getting to HZMB Hong Kong Port is easy via public transportation, with Citybus operating ten select routes. From Hong Kong Island, take Cityflyer routes A11 or A17, both of which stop at the bridge terminal en route to the airport. More frequent bus routes are available from Kowloon, including bus A21, A22 and A29.

To Guangzhou
There are numerous coaches departing from a number of points in Hong Kong to Guangzhou. Search PRD Guide for more information about routes and schedules.

Car hire services are commonly used when traveling between Hong Kong and Shenzhen, Macao, Zhuhai or Guangdong. Bookings can be made 24 hours ahead of departure on the following websites (a full list of licensed cross-border car hire services is available on the Transport Department website).

For more information on ferry schedules and pricing, visit the following websites. 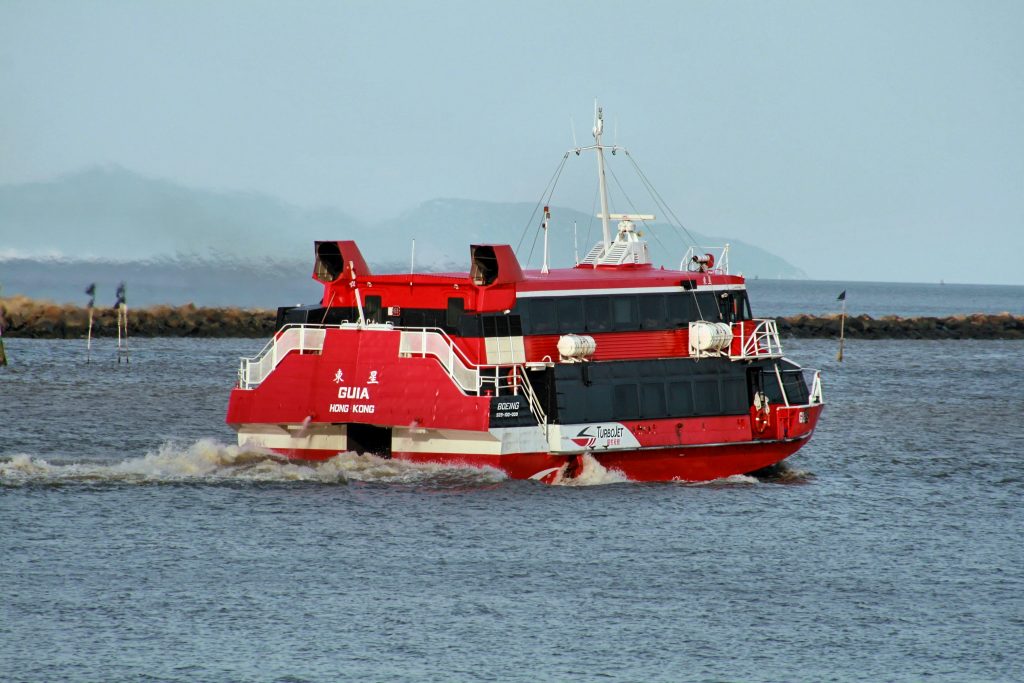 The easiest way to travel from Hong Kong to Zhuhai or Macao is by ferry. Ferries are also available to Guangzhou and Shenzhen.

To Macao
A one-hour-long, high-speed ferry journey is by far the most popular and affordable way to travel to Macao. Ferry operators offer regular sailings seven days a week from two terminals in the city: the Hong Kong-Macau Ferry Terminal in Sheung Wan and the China Ferry Terminal in Tsim Sha Tsui. All ferries arrive at either the Outer Harbour Ferry Terminal on Macao Peninsula or the Taipa Ferry Terminal on Taipa Island. As you purchase your ticket, be sure to clarify which one you will arrive at. A number of free shuttle buses will be waiting outside both terminals to take passengers to their hotels.

If you don’t have an hour to spare but have the cash to burn, consider traveling to Macao by helicopter for an experience you will never forget. If you only want to splash out on one of the legs, make it the return flight at night, when you get the full force of Hong Kong’s spectacular cityscape. Flights depart from the Hong Kong-Macau Ferry Terminal and arrive at the Outer Harbour Ferry Terminal. A one-way trip with Sky Shuttle takes just 15 minutes. 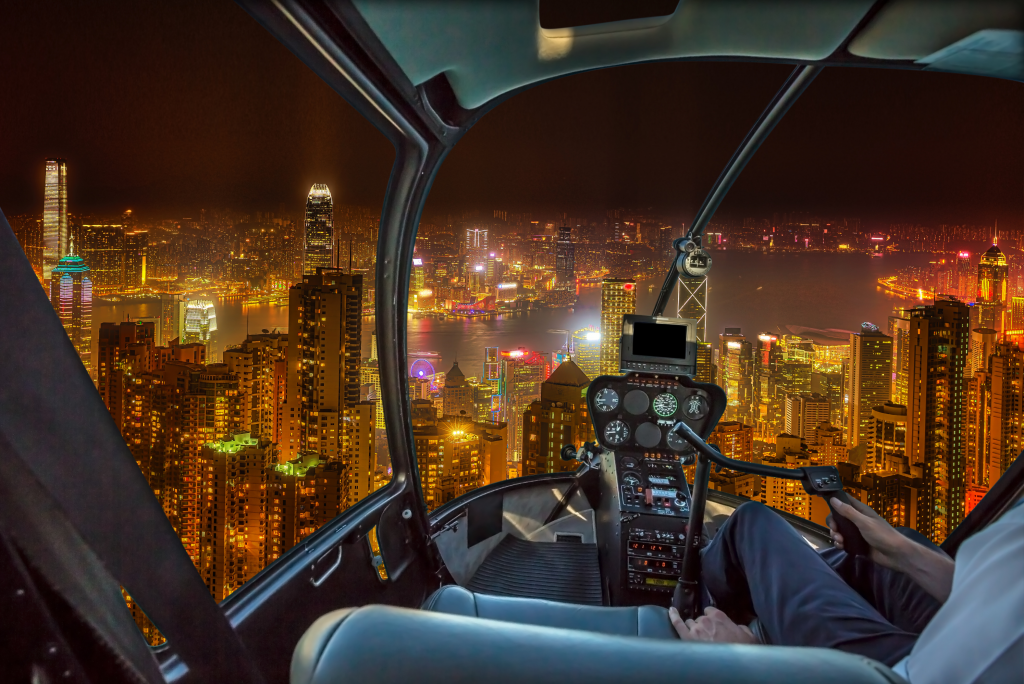 Driving from Hong Kong into the mainland is fairly complicated, requiring a mainland driving licence, an approval notice for the vehicle and driver from the Guangdong Public Security Bureau and a closed road permit for the vehicle from the Transport Department.

Driving from Hong Kong to Macao via the HZMB is a bit easier, although private car owners still need a permit and proper insurance coverage. There is a strict quota on permits for private cars to enter the Macao city center. The Macao Park and Ride Scheme, on the other hand, does not have a quota; you simply apply for a “closed road permit” which allows you to then reserve a parking spot at the Macao Port carpark.

More information about cross-boundary travel by car is available on the Hong Kong government’s website and the Transport Department website. 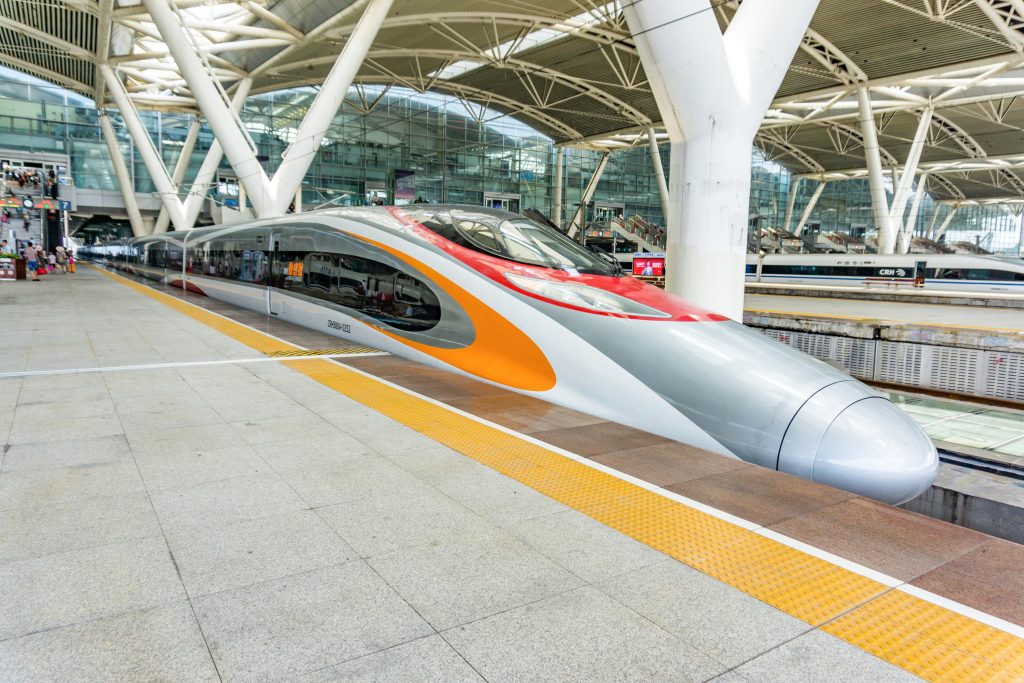 High-Speed Rail
The high-speed Guangzhou–Shenzhen–Hong Kong Express Rail Link connects West Kowloon station in Hong Kong with the mainland through 26km of track. During normal (non-pandemic) times, more than 30 pairs of bullet trains run between Hong Kong and Guangzhou every day, bringing a journey that used to take two hours down to just 50 minutes. Once you cross the border, you can take a domestic train to just about any city in China.

Tickets can be purchased from the train station but expect long lines at sales counters, particularly during peak travel seasons. The best option is to book your tickets online using the MTR’s High Speed Rail website.

The dual terminuses of the MTR’s East Rail line, Lo Wu and Lok Ma Chau, are right across the border from Shenzhen. They are directly connected (via footbridge) to the checkpoints of Luohu and Futian, which lead into the Shenzhen Metro. Luohu is the busiest checkpoint in Shenzhen, but both border crossings can be very crowded at times. 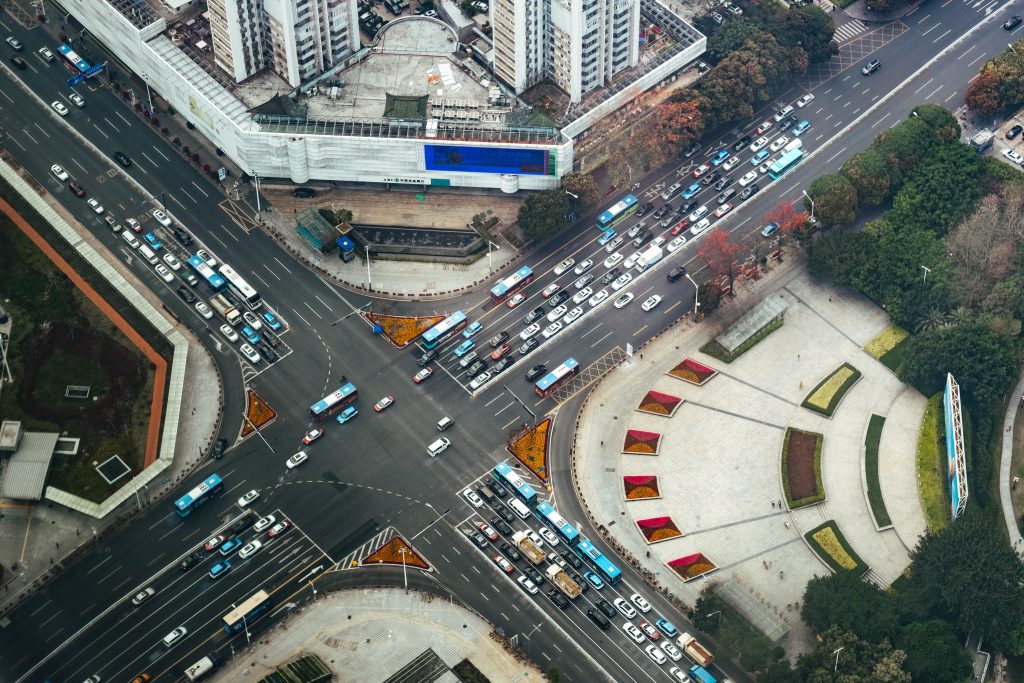 Public transportation and taxis (aided, perhaps, by a translation app) are your best bet for getting around the cities of the GBA.

“Road rules” in mainland China are notorious. If you’ve never driven in the country before, a big city like Guangzhou is not the place to start. Most visitors won’t consider renting a car or motorbike unless they plan to move there.

Taxis in Guangzhou and Shenzhen are relatively affordable and available in abundance. But unlike Hong Kong, the vast majority of cab drivers in mainland Chinese cities don’t understand a word of English, so it is advisable to have your destination written down in Chinese characters and ready to fish out in that classic, lost-in-translation moment.

Popular ride-hailing app DiDi (which bought out Uber’s Chinese operations in 2016) has offered a bilingual interface since 2017. (That being said, it can be tricky to set up an account as a tourist, as the service is more geared to local users.) 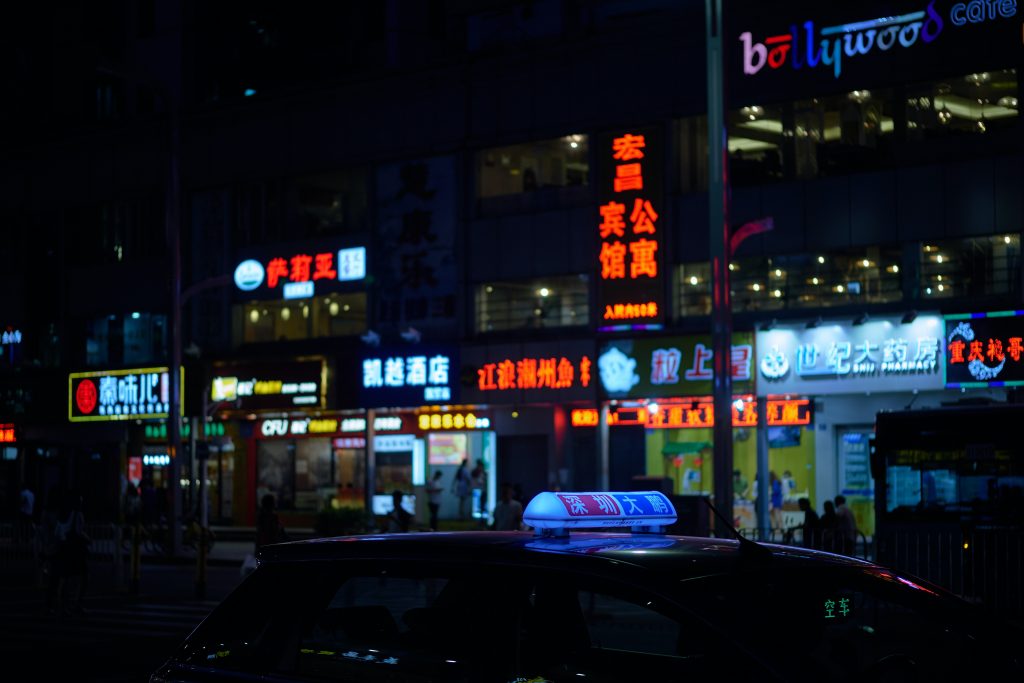 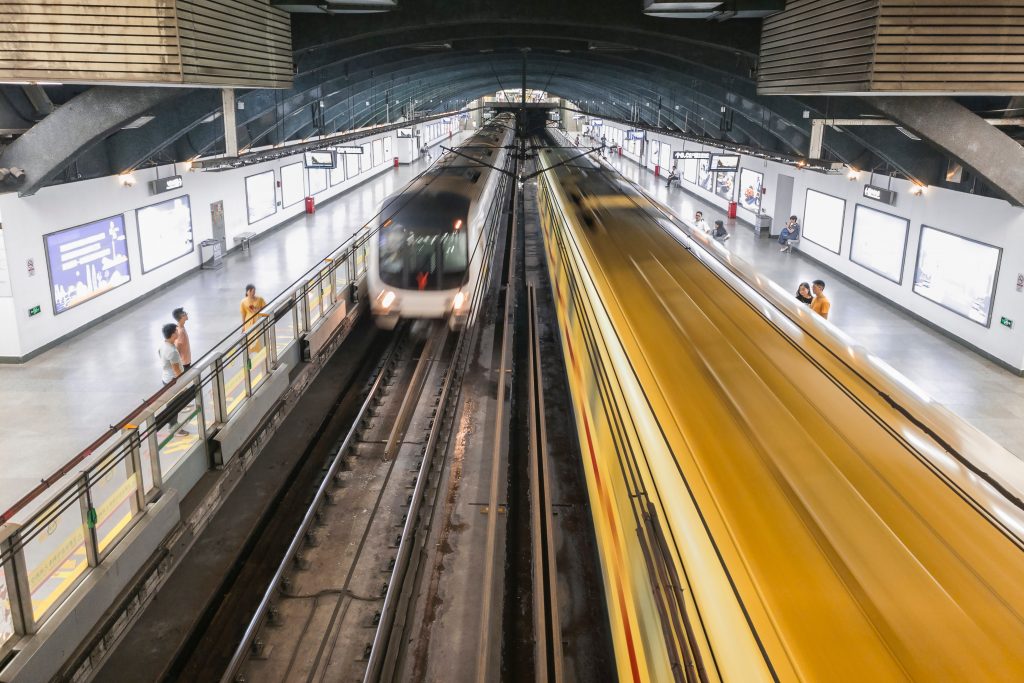 The ever-expanding Guangzhou and Shenzhen Metro systems will get you around those cities quite quickly. In Zhuhai, a metro system and tram network are currently under construction, making taxis the easiest way for most foreigners to get around that city.

Macao’s new light rail system opened in 2019. The Taipa Line runs in a U-shape along the island of Taipa, connecting the airport and Taipa Ferry Terminal with the Cotai strip and residential areas in Taipa city and Taipa Village. Four additional lines are currently planned.

The Macao Transport Bureau has an Bus Traveling System app with route information and real-time data on traffic and bus arrivals. 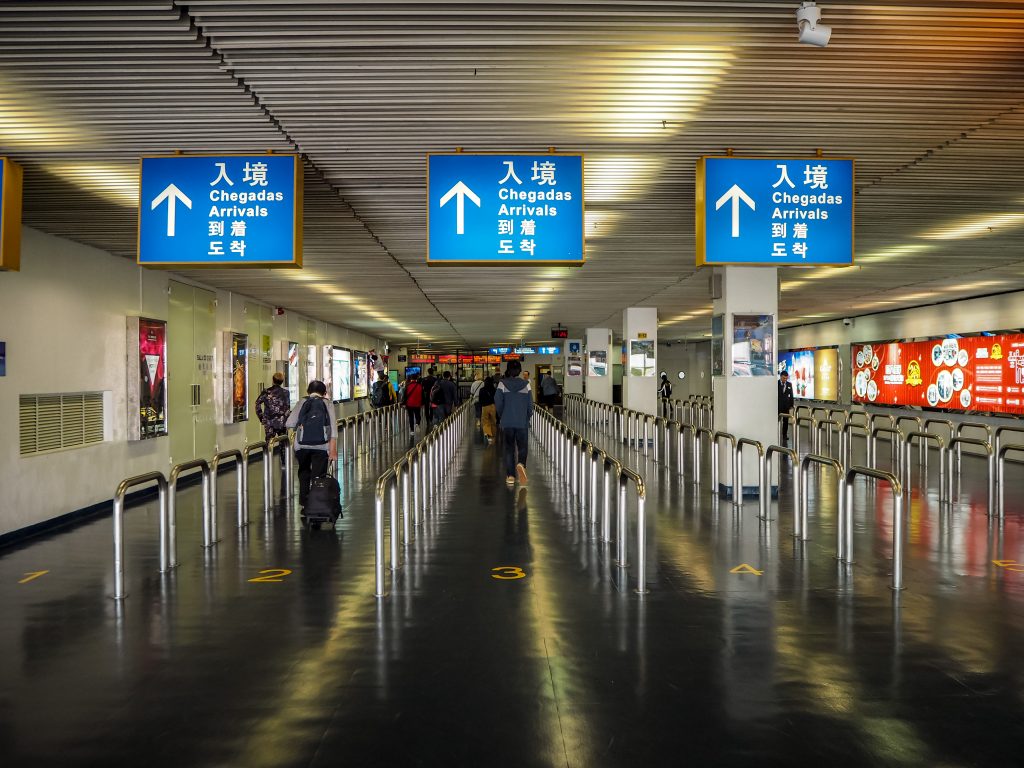 All visitors entering or leaving Macao need valid passports or other valid travel documents. Nationals of 76 countries and territories, including Hong Kong Identity Card and US passport holders, do not require visas. Citizens of other countries may apply for visas upon arrival at the immigration counter, though this is not advised. For more information about visas and Macao entry requirements, visit the Public Security Police Force website.

For travel to mainland China, most foreign visitors will need to acquire a visa in advance. In Hong Kong, the Ministry of Foreign Affairs has outsourced visa processing for foreign passport holders to the Chinese Visa Application Service Center in Wan Chai. For detailed information on how to apply for a visa, visit the CVASC website. The US Consulate also has information for American passport holders looking to travel to the mainland.

Shenzhen and Zhuhai, as SEZs, do offer short-term visas on arrival for eligible passport holders, which are valid for a few days (five for Shenzhen, three for Zhuhai) and do not permit travel to other mainland cities. Both visas are only available at certain entry points, so for example, travelers coming by MTR can apply at Luohu Port (Lo Wu) but not at Futian (Lok Ma Chau). As the rules about getting visas on approval can and do change frequently, it is advisable to secure a visa before departure.

As the rules about getting visas on approval can and do change frequently, it is advisable to secure a visa before departure.

About the GBA / Getting There / Getting Around / Entry Requirements

Before You Go / Things to Do / Dining

Things to Do / Shopping & Dining