“Southside” residents live amid pristine natural surroundings, enjoy beautiful sea views and are within walking distance of some of Hong Kong’s best beaches.

As is to be expected, such covetable environs don’t come cheap. Indeed, residences in the Southern District (which runs from Pok Fu Lam and Cyberport in the west to Shek O and Big Wave Bay in the east) command some of the highest rents in the territory. But those with the cash to spare can choose from some of the best real estate the city has to offer.

The opening of the MTR’s South Island Line (East) in 2016, connecting the bustling business district of Admiralty to the sleepy island of Ap Lei Chau, brought some of the convenience and efficiency of Hong Kong’s subway system to the exclusive Southside. (The proposed South Island Line (West), should it ever be built, would run along the western edge of Hong Kong Island, connecting the HKU stop in Sai Wan to Cyberport, Aberdeen and Wong Chuk Hang.) That being said, for many residents, the only option is to go by bus or car, and routes are limited. Traffic jams are common and part and parcel of living on the Southside.

The Southside is also home to several international schools, including the prestigious Hong Kong International School (featuring an American-style curriculum), as well as a number of exclusive private clubs, including the Hong Kong Country Club in Deep Water Bay and The American Club in Tai Tam. There are also some more affordable and accessible options to the big-name country clubs, such as the Aberdeen Boat Club and the Victoria Recreation Club, Hong Kong’s oldest sporting club.

Those with the cash to spare can choose from some of the best real estate the city has to offer.

Starting from the west and moving along to the east, here is a breakdown of Hong Kong’s Southern District by area.

The modern community of Pok Fu Lam surrounds a historical village that was settled centuries ago by people from the Chan, Wong and Luo clans. The population of the village increased after World War II, and vegetable gardens were gradually developed into living quarters and residences. A few historical houses remain, but most have been rebuilt.

Pok Fu Lam’s location, which is far enough away from the noise of the city yet close enough to its conveniences, makes it an attractive area to reside in. Pok Fu Lam is also directly next to Cyberport, the business park that houses an incubation program for digital tech entrepreneurs and serves as the center of Hong Kong’s fintech community. The Cyberport development includes a waterfront park popular with families and dog owners, a five-star hotel, a shopping center, and cinemas.

The district of Pok Fu Lam offers a diversity of residential options at varying price points. Thanks to its location on the Island, many properties in the area offer expansive views of the South China Sea. 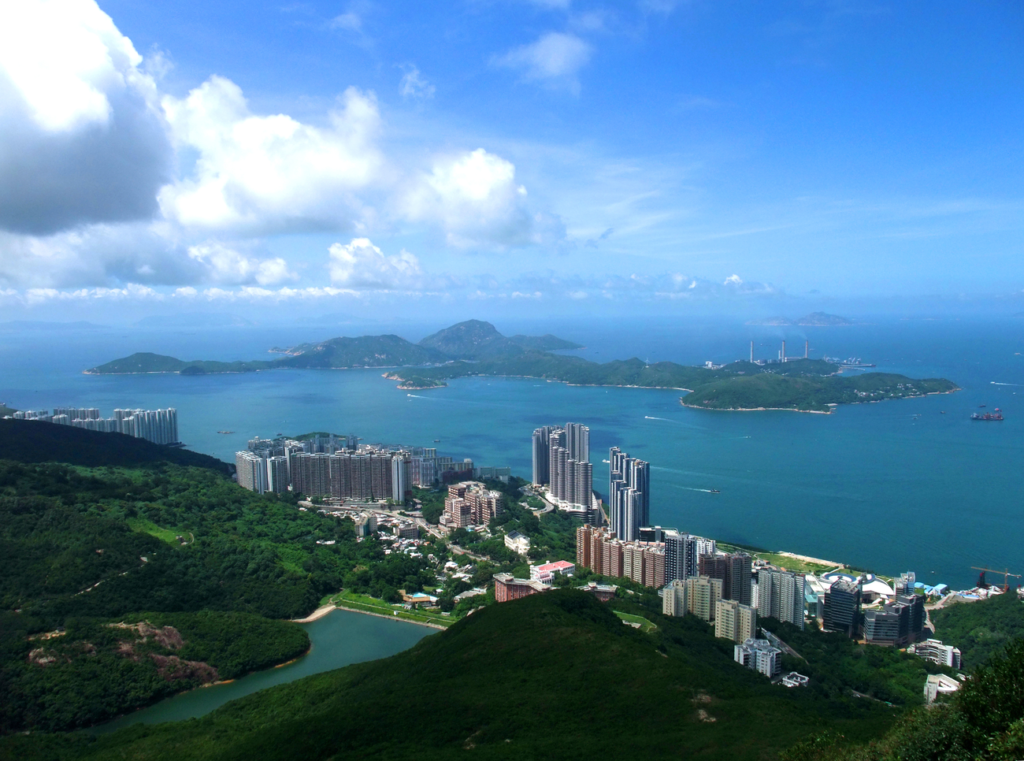 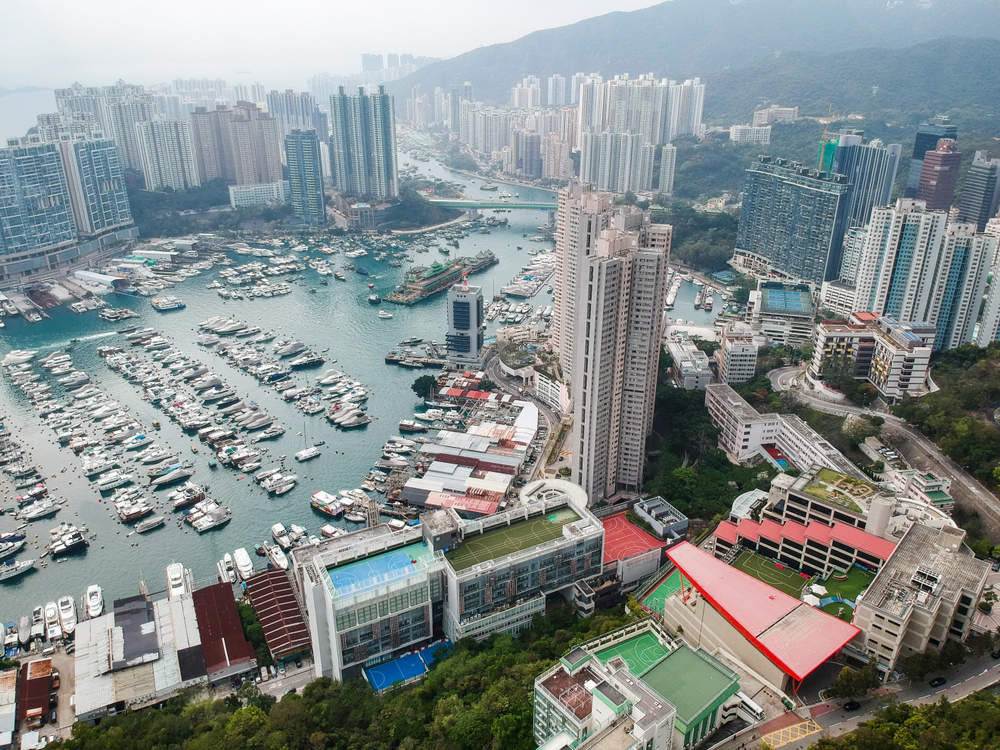 Next along the coast is Aberdeen and the island of Ap Lei Chau. Aberdeen is famous for its sheltered harbor that was historically home to a large fisherfolk community who lived on boats. With its iconic backdrop of traditional fishing vessels and sampans, the Aberdeen of yore was often featured in Hollywood films to showcase the history and culture of Hong Kong. The shelter was also a haven for pirates more than a century ago.

Although you are likely to see more yachts than sampans in Aberdeen today, a few traditional fishing boats remain in operation for touristic purposes — allowing riders to catch a glimpse of a historical way of life that is slowly diminishing. From the Aberdeen Typhoon Shelter, you can take a small ferry or rent a sampan for sightseeing or a short trip to visit the adjacent Lamma Island.

The Aberdeen Marina Club and Aberdeen Boat Club are two members-only private clubs serving boating, sailing and fishing enthusiasts with their own venue and docks. On weekends the clubs are hives for those who plan on a day of sailing, relaxation and leisure around Hong Kong’s waters.

Ap Lei Chau is an island off Aberdeen connected by a bridge to Hong Kong Island. Small but densely populated, the island comprises several high-rise residential estates, including the popular South Horizons complex. Residents are drawn to the island’s laid back, wholesome, community feel. Ap Lei Chau is now serviced by the MTR’s South Island Line (East) which boosts its attractiveness as a place to live. Horizon Plaza, the 26-story furniture and clothing outlet mall, is a huge draw for day-trippers to the island.

Residents are drawn to the island’s laid back, wholesome, community feel.

Popular properties in Aberdeen and Ap Lei Chau include: 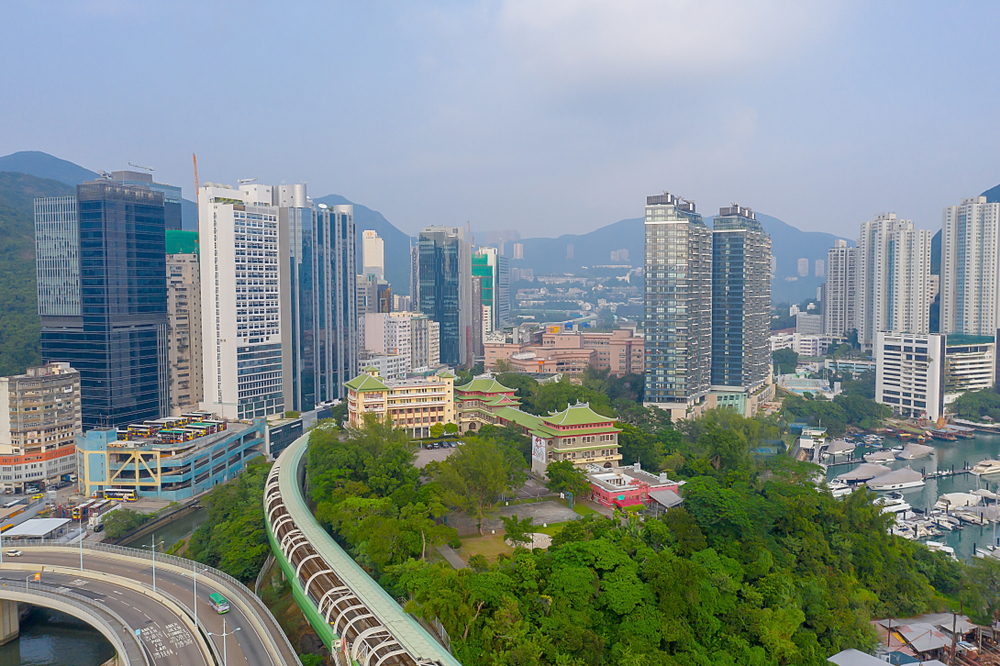 The industrial area of Wong Chuk Hang has become something of a hub for art and dining in recent years. Contemporary art galleries, hipster cafes and trendy bars dot the area, giving it a modern and cultured vibe, while its ideal location close to public transport and other urban amenities make it an appealing (and still relatively affordable) residential option on the Southside.

Just past the Aberdeen Tunnel on the left is Shouson Hill, an area of low-rise apartment blocks and townhouses with gardens, terraces and car parks. This area is quiet, peaceful and rural in nature, with easy access to the north side of the Island (Happy Valley and Causeway Bay) via the Aberdeen Tunnel. The area is accessible by bus and taxi, although many residents have their own cars. 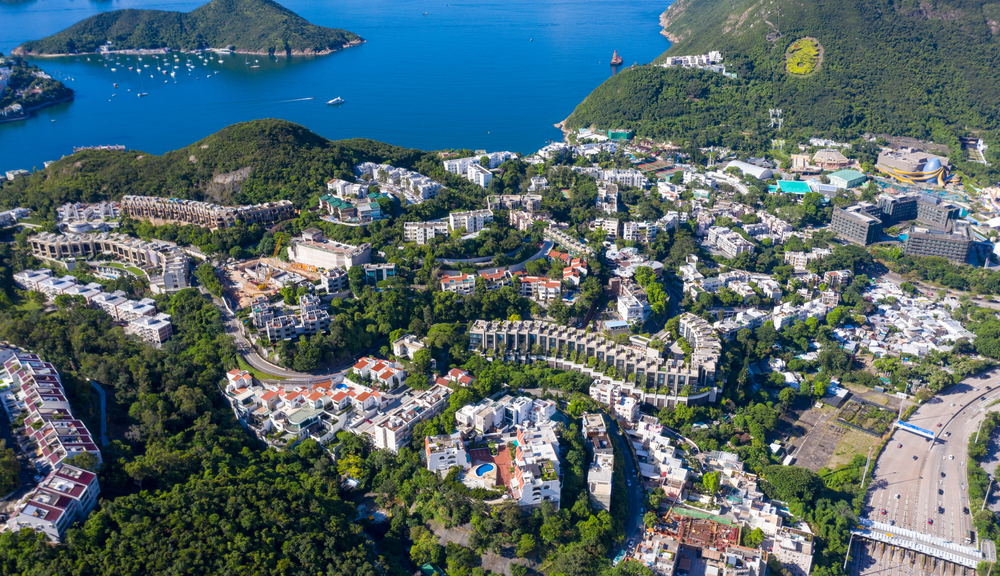 Following along the coastal road towards the east is the exclusive area of Deep Water Bay. This premium neighborhood boasts some of the most expensive detached houses in all of Hong Kong. With high fences, security gates, manicured gardens and private drives, many are residences of foreign diplomats, Hong Kong tycoons and the very affluent.

Residences in the area — predominantly townhouses and houses with private gardens — are generally very large, ranging from 2,000-7,000 square feet. Though less crowded than the adjacent Repulse Bay, Deep Water Bay Beach draws many visitors on weekends, especially during summer holidays. Gatherings at the beach’s designated BBQ area are a common sight.

The Hong Kong Golf Club at Deep Water Bay has been operating since 1898 and, despite being somewhat small when compared to other full-scale courses, is recognized as one of the leading golf clubs worldwide.

Further down east on Island Road from Deep Water Bay is Repulse Bay — a peaceful and exclusive neighborhood with green hills and a long public beach. Originally a resort destination with a renowned luxury hotel, Repulse Bay today is a prestigious residential area with superb views of the bay. The beach itself is a popular destination for families and tourists because of its pristine sands and calm waters, as well as the pleasant waterfront eateries at The Pulse shopping arcade. 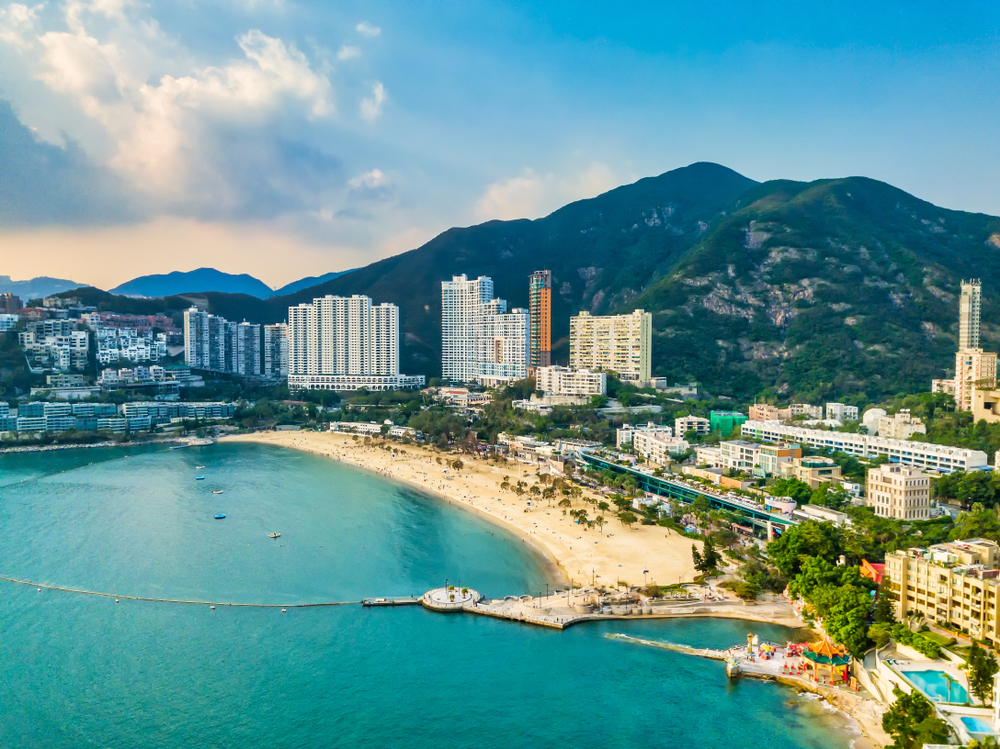 The next major stop on Repulse Bay Road is Stanley Village. Once a fishing village, the entire area is now one of Hong Kong’s most historic and best-known tourist attractions. Nearby Stanley Fort was the site of fierce fighting in the defense of Hong Kong during the invasion of Japanese forces in December 1941, and was used as a civilian internment camp from 1942-1945. After the war, the fort was again occupied by the British Army until 1997, when it was handed over to its current occupants, the People’s Liberation Army.

Many expats choose to live in Stanley for its laid back and friendly vibe. Older townhouses sit alongside new upscale developments in this charming seaside community. The biggest advantage of living in Stanley Village is its proximity to the shopping havens of Stanley Market and Stanley Plaza, a public library, Stanley Beach (a popular site for water sports) and some great restaurants and cafes.

In May or June each year, the tranquil residential environment of Stanley Village is disrupted by the noise and energy of the Dragon Boat races. These annual races, held in celebration of the Chinese Tuen Ng Festival, draw thousands of competitors and spectators to Stanley Main Beach each year.

The scenic mountainous area of Tai Tam lies to the east of Stanley, facing Tai Tam Bay. Steeped in history, the area was the scene of heavy fighting between Commonwealth and Japanese forces in 1941. Today, Tai Tam features four large, fully functioning reservoirs, a country park, and some of the best hiking trails on the Island.

The exclusive American Club, as well as a number of upscale private residences, are located in the area.

International schools near Stanley and Tai Tam include:

Properties in Tai Tam tend to have shuttle buses to Central and Stanley. Some popular developments include: 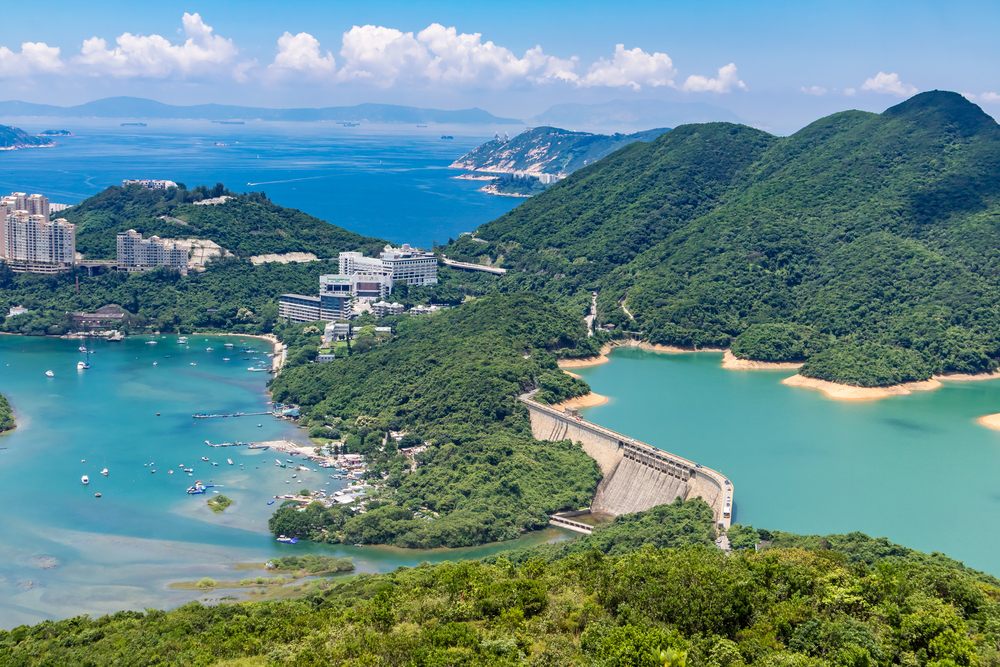 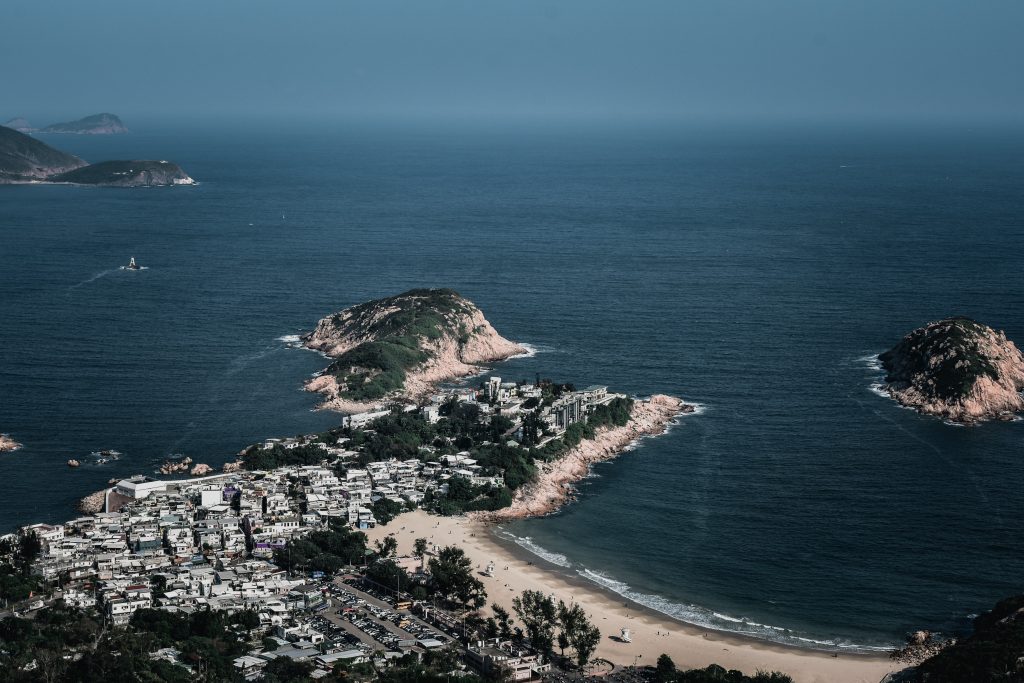 As its name suggests, Big Wave Bay is famous for its big rolling waves, making it a top destination for surfers and thrill seekers alike.

Nearby is the Shek O Country Club, a private members’ club with a golf course.

Back to Hong Kong Island >>